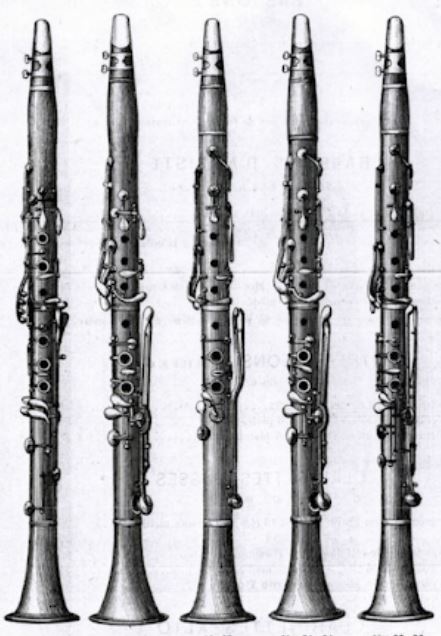 A clarinet is a musical instrument of the woodwind family.
The word comes from Italian, the last syllable -et means small and clarino means trumpet; The earliest clarinets had a sound that was reminiscent of a trumpet. (Wikipedia)

The clarinet was developed from the shawm, which in turn came from the flute. The shawm already had a mouthpiece similar to the clarinet, which was played with a reed, but no octave or register keys. The bore was largely cylindrical. The range was limited to about one and a half octaves.
Around 1700 the German instrument maker from Nuremberg (Johann Christoph Denner) added a register key and thus created the first clarinet.

The first clarinets played best in the middle register and were not well suited to playing in the low register. Therefore, additional flaps for the lower register have been added. This is still called by the clarinetist Chalumeau register.

The next major improvement was the development of better upholstery. Originally, only felt was used, but it was not airtight. Only the use of the Russian Müller better padding allowed the addition of more keys, which significantly expanded the playability and scope of the instrument. He designed a clarinet with seven finger holes and thirteen keys. This enabled the clarinet to play at far more pitches with almost the same ease.

The next major development was created in 1839 by Hyacinthe Klosé. He moved the clarinet keys, making it much easier to play. Based on the ideas of the flute maker Theobald Boehm, Klosé developed an easily playable flap system that is still in use today and is the most widely used worldwide. .
The clarinet found a large following and is used in almost every musical style. In addition to being used as a solo, chamber music, and orchestral instrument, it gained a lot of popularity in jazz through Benny Goodman, Eddie Daniels, and Buddy DeFranco. It has become indispensable in the Balkans, Roma, and Klezmer music.
Help us to get better
Was this article helpful?